I am interested in individual variation in dispersal and its consequences for the ecological and evolutionary dynamics of populations and communities. In my postdoc in the Gonzalez lab, I am asking whether the conditions or configuration of the environment influences the number and phenotypes of dispersers, and how this will affect network connectivity and ultimately, the maintenance of biodiversity. This is a critical question in a time when humans are increasingly causing the destruction and fragmentation of natural habitat. The way in which species modulate their dispersal responses to changing environments will determine their risk of extinction by influencing their ability to exploit patchily distributed habitat fragments, shift their ranges in response to climate change, and maintain genetic diversity. 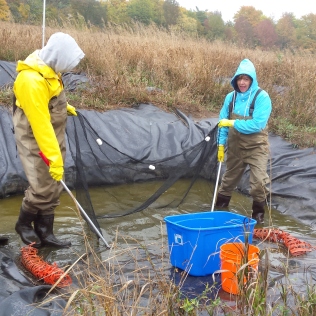 My PhD supervisor Shannon McCauley and reserve manager Stephan Schneider (left panel), and many helpers (right panel) collecting backswimmers in the artificial pond array at the University of Toronto’s Koffler Scientific Reserve for a study on backswimmer dispersal.